In the previous article we built a very simple data structure, which is the essence of blockchain database. And we made it possible to add blocks to it with the chain-like relation between them: each block is linked to the previous one. Alas, our blockchain implementation has one significant flaw: adding blocks to the chain is easy and cheap. One of the keystones of blockchain and Bitcoin is that adding new blocks is a hard work. Today we’re going to fix this flaw.

This mechanism is very similar to the one from real life: one has to work hard to get a reward and to sustain their life. In blockchain, some participants (miners) of the network work to sustain the network, to add new blocks to it, and get a reward for their work. As a result of their work, a block is incorporated into the blockchain in a secure way, which maintains the stability of the whole blockchain database. It’s worth noting that, the one who finished the work has to prove this.

This whole “do hard work and prove” mechanism is called proof-of-work. It’s hard because it requires a lot of computational power: even high performance computers cannot do it quickly. Moreover, the difficulty of this work increases from time to time to keep new blocks rate at about 6 blocks per hour. In Bitcoin, the goal of such work is to find a hash for a block, that meets some requirements. And it’s this hash that serves as a proof. Thus, finding a proof is the actual work.

One last thing to note. Proof-of-Work algorithms must meet a requirement: doing the work is hard, but verifying the proof is easy. A proof is usually handed to someone else, so for them, it shouldn’t take much time to verify it.

In this paragraph, we’ll discuss hashing. If you’re familiar with the concept, you can skip this part.

Hashing is a process of obtaining a hash for specified data. A hash is a unique representation of the data it was calculated on. A hash function is a function that takes data of arbitrary size and produces a fixed size hash. Here are some key features of hashing: 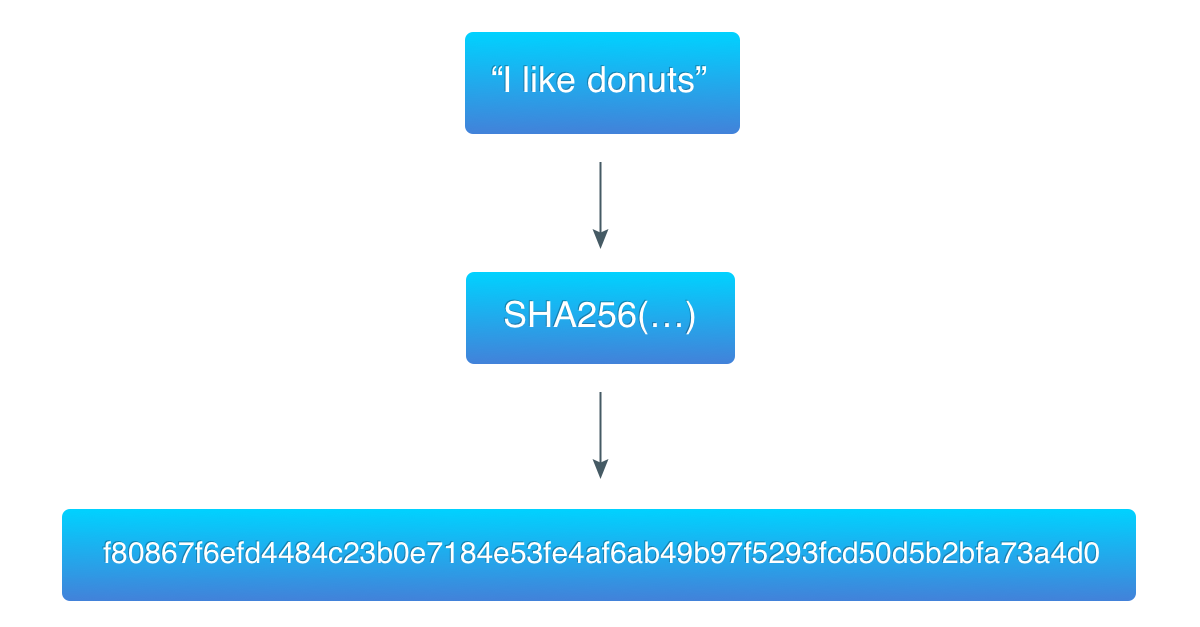 Hashing functions are widely used to check the consistency of data. Some software providers publish checksums in addition to a software package. After downloading a file you can feed it to a hashing function and compare produced hash with the one provided by the software developer.

In blockchain, hashing is used to guarantee the consistency of a block. The input data for a hashing algorithm contains the hash of the previous block, thus making it impossible (or, at least, quite difficult) to modify a block in the chain: one has to recalculate its hash and hashes of all the blocks after it.

Bitcoin uses Hashcash, a Proof-of-Work algorithm that was initially developed to prevent email spam. It can be split into the following steps:

Now let’s look closer at the requirements a hash has to meet. In the original Hashcash implementation, the requirement sounds like “first 20 bits of a hash must be zeros”. In Bitcoin, the requirement is adjusted from time to time, because, by design, a block must be generated every 10 minutes, despite computation power increasing with time and more and more miners joining the network.

To demonstrate this algorithm, I took the data from the previous example (“I like donuts”) and found a hash that starts with 3 zero-bytes: 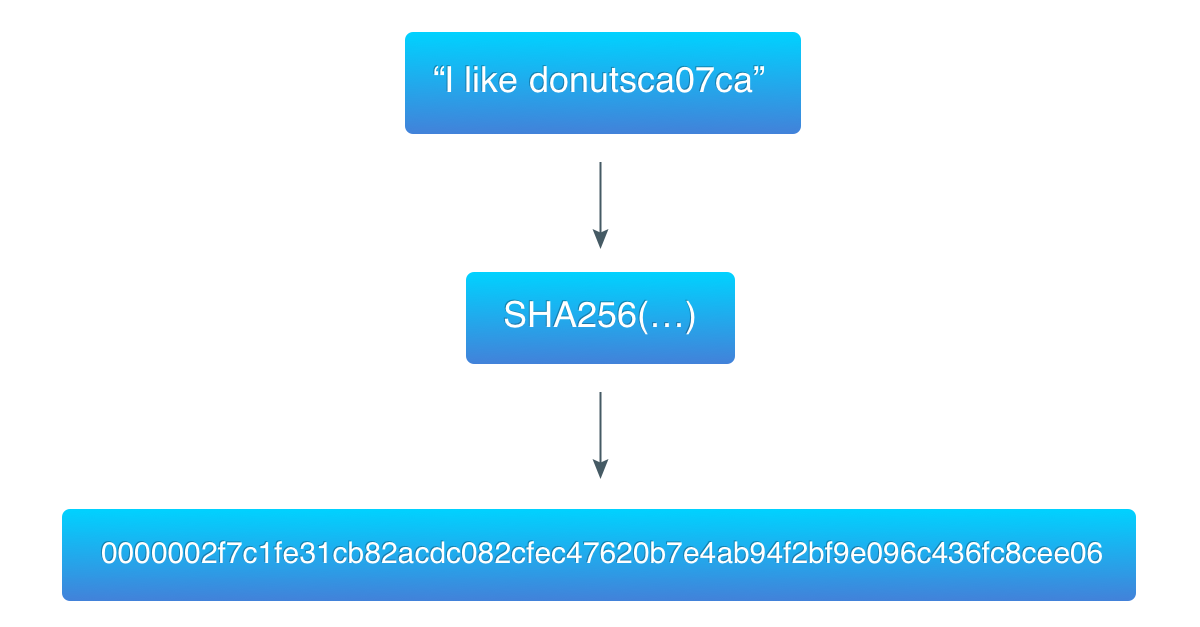 ca07ca is the hexadecimal value of the counter, which is 13240266 in the decimal system.

In Bitcoin, “target bits” is the block header storing the difficulty at which the block was mined. We won’t implement a target adjusting algorithm, for now, so we can just define the difficulty as a global constant.

24 is an arbitrary number, our goal is to have a target that takes less than 256 bits in memory. And we want the difference to be significant enough, but not too big, because the bigger the difference the more difficult it’s to find a proper hash.

In the NewProofOfWork function, we initialize a big.Int with the value of 1 and shift it left by 256 - targetBits bits. 256 is the length of a SHA-256 hash in bits, and it’s SHA-256 hashing algorithm that we’re going to use. The hexadecimal representation of target is:

And it occupies 29 bytes in memory. And here’s its visual comparison with the hashes from the previous examples:

You can think of a target as the upper boundary of a range: if a number (a hash) is lower than the boundary, it’s valid, and vice versa. Lowering the boundary will result in fewer valid numbers, and thus, more difficult work required to find a valid one.

Now, we need the data to hash. Let’s prepare it:

This piece is straightforward: we just merge block fields with the target and nonce. nonce here is the counter from the Hashcash description above, this is a cryptographic term.

Ok, all preparations are done, let’s implement the core of the PoW algorithm:

First, we initialize variables: hashInt is the integer representation of hash; nonce is the counter. Next, we run an “infinite” loop: it’s limited by maxNonce, which equals to math.MaxInt64; this is done to avoid a possible overflow of nonce. Although the difficulty of our PoW implementation is too low for the counter to overflow, it’s still better to have this check, just in case.

In the loop we:

As easy as it was explained earlier. Now we can remove the SetHash method of Block and modify the NewBlock function:

Here you can see that nonce is saved as a Block property. This is necessary because nonce is required to verify a proof. The Block structure now looks so:

Alright! Let’s run the program to see if everything works fine:

Yay! You can see that every hash now starts with three zero bytes, and it takes some time to get these hashes.

There’s one more thing left to do: let’s make it possible to validate proof of works.

And this is where we need the saved nonce.

Our blockchain is a step closer to its actual architecture: adding blocks now requires hard work, thus mining is possible. But it still lacks some crucial features: the blockchain database is not persistent, there are no wallets, addresses, transactions, and there’s no consensus mechanism. All these things we’ll implement in future articles, and for now, happy mining!