Transactions are the heart of Bitcoin and the only purpose of blockchain is to store transactions in a secure and reliable way, so no one could modify them after they are created. Today we’re starting implementing transactions. But because this is quite a big topic, I’ll split it into two parts: in this part, we’ll implement the general mechanism of transactions and in the second part we’ll work through details.

Also, since code changes are massive, it makes no sense describing all of them here. You can see all the changes here.

There is no spoon

Since blockchain is a public and open database, we don’t want to store sensitive information about wallet owners. Coins are not collected in accounts. Transactions do not transfer money from one address to another. There’s no field or attribute that holds account balance. There are only transactions. But what’s inside a transaction?

A transaction is a combination of inputs and outputs:

Inputs of a new transaction reference outputs of a previous transaction (there’s an exception though, which we’ll discuss later). Outputs are where coins are actually stored. The following diagram demonstrates the interconnection of transactions: 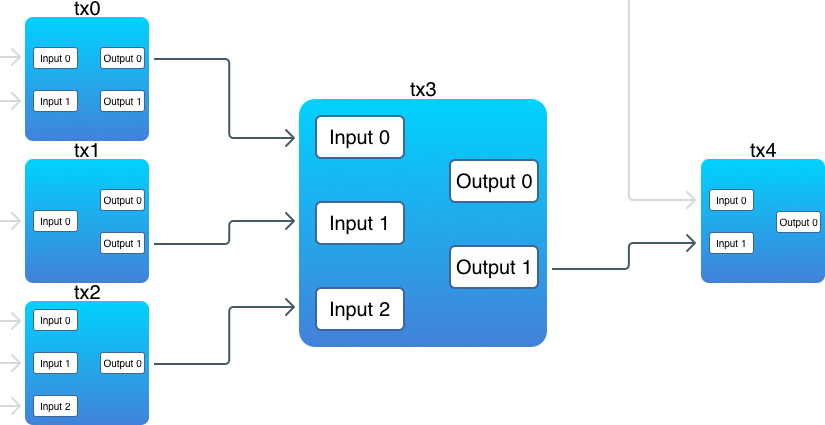 Throughout this article, we’ll use words like “money”, “coins”, “spend”, “send”, “account”, etc. But there are no such concepts in Bitcoin. Transactions just lock values with a script, which can be unlocked only by the one who locked them.

Actually, it’s outputs that store “coins” (notice the Value field above). And storing means locking them with a puzzle, which is stored in the ScriptPubKey. Internally, Bitcoin uses a scripting language called Script, that is used to define outputs locking and unlocking logic. The language is quite primitive (this is made intentionally, to avoid possible hacks and misuses), but we won’t discuss it in details. You can find a detailed explanation of it here.

In Bitcoin, the value field stores the number of satoshis, not the number of BTC. A satoshi is a hundred millionth of a bitcoin (0.00000001 BTC), thus this is the smallest unit of currency in Bitcoin (like a cent).

By the way, having such scripting language means that Bitcoin can be used as a smart-contract platform as well.

One important thing about outputs is that they are indivisible, which means that you cannot reference a part of its value. When an output is referenced in a new transaction, it’s spent as a whole. And if its value is greater than required, a change is generated and sent back to the sender. This is similar to a real world situation when you pay, say, a $5 banknote for something that costs $1 and get a change of $4.

And here’s the input:

As mentioned earlier, an input references a previous output: Txid stores the ID of such transaction, and Vout stores an index of an output in the transaction. ScriptSig is a script which provides data to be used in an output’s ScriptPubKey. If the data is correct, the output can be unlocked, and its value can be used to generate new outputs; if it’s not correct, the output cannot be referenced in the input. This is the mechanism that guarantees that users cannot spend coins belonging to other people.

Again, since we don’t have addresses implemented yet, ScriptSig will store just an arbitrary user defined wallet address. We’ll implement public keys and signatures checking in the next article.

Let’s sum it up. Outputs are where “coins” are stored. Each output comes with an unlocking script, which determines the logic of unlocking the output. Every new transaction must have at least one input and output. An input references an output from a previous transaction and provides data (the ScriptSig field) that is used in the output’s unlocking script to unlock it and use its value to create new outputs.

But what came first: inputs or outputs?

In Bitcoin, it’s the egg that came before the chicken. The inputs-referencing-outputs logic is the classical “chicken or the egg” situation: inputs produce outputs and outputs make inputs possible. And in Bitcoin, outputs come before inputs.

When a miner starts mining a block, it adds a coinbase transaction to it. A coinbase transaction is a special type of transactions, which doesn’t require previously existing outputs. It creates outputs (i.e., “coins”) out of nowhere. The egg without a chicken. This is the reward miners get for mining new blocks.

As you know, there’s the genesis block in the beginning of a blockchain. It’s this block that generates the very first output in the blockchain. And no previous outputs are required since there are no previous transactions and no such outputs.

In Bitcoin, the very first coinbase transaction contains the following message: “The Times 03/Jan/2009 Chancellor on brink of second bailout for banks”. You can see it yourself.

subsidy is the amount of reward. In Bitcoin, this number is not stored anywhere and calculated based only on the total number of blocks: the number of blocks is divided by 210000. Mining the genesis block produced 50 BTC, and every 210000 blocks the reward is halved. In our implementation, we’ll store the reward as a constant (at least for now 😉 ).

From now on, every block must store at least one transaction and it’s no more possible to mine blocks without transactions. This means that we should remove the Data field of Block and store transactions instead:

NewBlock and NewGenesisBlock also must be changed accordingly:

Next thing to change is the creation of a new blockchain:

Now, the function takes an address which will receive the reward for mining the genesis block.

The Proof-of-Work algorithm must consider transactions stored in a block, to guarantee the consistency and reliability of blockchain as a storage of transaction. So now we must modify the ProofOfWork.prepareData method:

Again, we’re using hashing as a mechanism of providing unique representation of data. We want all transactions in a block to be uniquely identified by a single hash. To achieve this, we get hashes of each transaction, concatenate them, and get a hash of the concatenated combination.

Bitcoin uses a more elaborate technique: it represents all transactions containing in a block as a Merkle tree and uses the root hash of the tree in the Proof-of-Work system. This approach allows to quickly check if a block contains certain transaction, having only just the root hash and without downloading all the transactions.

Let’s check that everything is correct so far:

Good! We received out first mining reward. But how do we check the balance?

We need to find all unspent transaction outputs (UTXO). Unspent means that these outputs weren’t referenced in any inputs. On the diagram above, these are:

Of course, when we check balance, we don’t need all of them, but only those that can be unlocked by the key we own (currently we don’t have keys implemented and will use user defined addresses instead). First, let’s define locking-unlocking methods on inputs and outputs:

Here we just compare the script fields with unlockingData. These pieces will be improved in a future article, after we implement addresses based on private keys.

The next step - finding transactions containing unspent outputs - is quite difficult:

Since transactions are stored in blocks, we have to check every block in a blockchain. We start with outputs:

If an output was locked by the same address we’re searching unspent transaction outputs for, then this is the output we want. But before taking it, we need to check if an output was already referenced in an input:

We skip those that were referenced in inputs (their values were moved to other outputs, thus we cannot count them). After checking outputs we gather all inputs that could unlock outputs locked with the provided address (this doesn’t apply to coinbase transactions, since they don’t unlock outputs):

The function returns a list of transactions containing unspent outputs. To calculate balance we need one more function that takes the transactions and returns only outputs:

That’s it! Now we can implement getbalance command:

The account balance is the sum of values of all unspent transaction outputs locked by the account address.

Let’s check our balance after mining the genesis block:

This is our first money!

Now, we want to send some coins to someone else. For this, we need to create a new transaction, put it in a block, and mine the block. So far, we implemented only the coinbase transaction (which is a special type of transactions), now we need a general transaction:

Before creating new outputs, we first have to find all unspent outputs and ensure that they store enough value. This is what FindSpendableOutputs method does. After that, for each found output an input referencing it is created. Next, we create two outputs:

FindSpendableOutputs method is based on the FindUnspentTransactions method we defined earlier:

Now we can modify the Blockchain.MineBlock method:

Sending coins means creating a transaction and adding it to the blockchain via mining a block. But Bitcoin doesn’t do this immediately (as we do). Instead, it puts all new transactions into memory pool (or mempool), and when a miner is ready to mine a block, it takes all transactions from the mempool and creates a candidate block. Transactions become confirmed only when a block containing them is mined and added to the blockchain.

Now, Helen’s coins are locked in two outputs: one from Pedro and one from Ivan. Let’s send them to someone else:

Phew! It wasn’t easy, but we have transactions now! Although, some key features of a Bitcoin-like cryptocurrency are missing: